Erik Sorto, 34, has been paralysed from the neck down for the past 13 years. However, thanks to a ground-breaking clinical trial, he has been able to smoothly drink a bottle of beer using a robotic arm controlled with a brain implant. He isn't the first patient to control an arm with a neural prosthetic device. But this represents the first time the implant was placed in a region of the brain thought to control the intention to perform movements, rather than the ensuing mechanics of movement. This difference created surprisingly natural movements and has the potential to work for multiple robotic limbs. 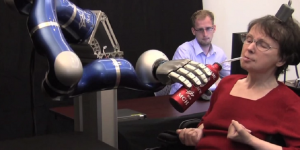 Electrodes implanted in the brain were used to control mechanical motion.

Through illness or injury, millions of individuals have lost the ability to sense and move their bodies. In recent years, a handful of studies have shown that it is possible to record brain activity from such individuals and use this information to restore movement capabilities. Signals recorded from primary motor cortex—a part of the brain that is necessary for the control of movement—have been used to direct external devices such as a cursor on a computer screen, and even robotic arms.

However, this approach often results in delayed, shaky movement. As research in this area continues to move forward, new possibilities are being explored. The latest study tried a new approach: measuring neurons in a part of the brain called the posterior parietal cortex, which is thought to process the intention to perform actions,

Before we perform any action, we must first intend to act. For routine actions of everyday life, such as grasping our favourite coffee mug or flicking on a light switch, our intentions unfold effortlessly and within fractions of a second, so they typically go unnoticed.

Despite these fleeting and effortless qualities, a wealth of evidence from basic psychology and neuroscience suggests that our action intentions constitute an incredibly rich source of information, including desired outcomes, predicted sensory experiences, and movements. While it is generally accepted that this information is useful for the control of actions, this hypothesis is inherently difficult to evaluate.

In the new study, the information recorded from the neurons in the posterior parietal cortex was used to control the operations of a computer interface and visual display. Sorto had suffered a spinal cord injury due to a gun shot 10 years prior to the study, and as a result is unable to move or feel his arms, legs, and torso. The researchers first used functional magnetic resonance imaging to identify brain areas that were active as he imagined reaching and grasping movements.

They then implanted electrodes in that area that could record the activity of individual nerve cells. Recordings from these electrodes showed that the patient could voluntarily control the activity of single neurons. Some of these cells responded in a remarkably specific way. For example, a cell might show increasing or decreasing activity when Sorto imagined moving his hand to his mouth, but not when he imagined moving his hand to his chin or to his ear.

The activity of some cells were shown to be specifically related to either intended arm or eye movements; of those that were selective for arm movements, some were active when Sorto envisioned movements with either arm while others responded only when considering movements with a single arm. The authors say that the information from cells representing to either hand may be important for controlling actions involving both hands. This also means that these signals might be capable of controlling a robotic interface with multiple appendages.

These signals may also be flexible. Consider the different ways that we are able to use hand-held tools of various shapes and sizes—even ones that move and are therefore controlled differently—to perform very similar actions and achieve the same goals. For example, we are able to write our name on paper using a pencil or in the sand using a stick. The goals of the action are the same, but the tools used to achieve those goals differ.

In order to accomplish this, the control system must be able to accommodate changing qualities of tools and the environment. Perhaps by recording from cells that appear to reflect action intentions, the information that is captured is similarly malleable. This may prove essential if we want to use the same brain signals to control a wide range of devices.

Fans of the Star Wars films will recall the scene from Empire Strikes Back where Luke Skywalker flexes his new cybernetic hand for the first time. We're still a long way away from that, but for patients who are unable to move most of their body, this new work is a tremendous step forward. And it certainly has the potential to revolutionise research in the field.